The number of foreign tourists to Việt Nam in the first six months of 2018 surged 27.2 per cent year-on-year to 7.9 million, Nguyễn Văn Tuấn, chairman of the Việt Nam National Administration of Tourism (VNAT), announced on Thursday. 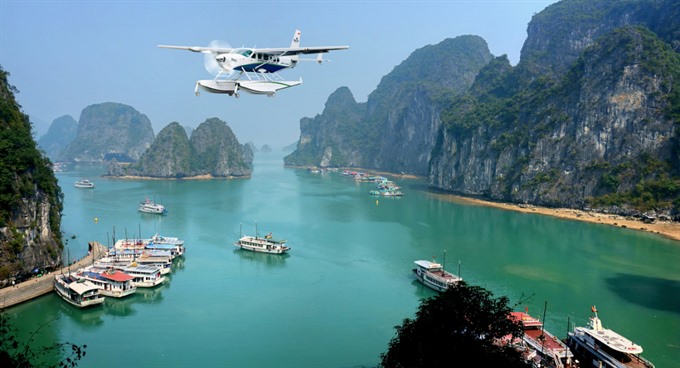 Among the 7.9 million of foreign tourists to Việt Nam, Chinese tourists accounted for the majority (4.1 million).

Total income from tourism was estimated at VNĐ312 trillion (US$13.5 billion), an increase of 22.5 per cent in comparison with the same period last year.

Arrivals by air, road, and sea in the reviewed period recorded annual increases of 22.2 per cent, 63.7 per cent and 1.7 per cent, respectively, while growth was also seen in the numbers of visitors from all five continents.

More than 93 per cent of interviewed foreign tourists said they were satisfied with their trips to Viet Nam, according to the Việt Nam Annual Tourism Report 2017 announced on Thursday by the VNAT.

It distributed 27,000 feedback forms to foreigners at 12 international bordergates nationwide, including four airports, four land border gates and four seaports. Results showed that up to 93.46 per cent of respondents were satisfied or very satisfied with their trips in Việt Nam. Only 0.63 per cent recorded any dissatisfaction.

More than 92.5 per cent of tourists stayed overnight in Viet Nam at tourism accommodation and 7.4 per cent visited the country for one day. More than 60 per cent organised their trips by themselves.

The results were attributed to efforts taken by the tourism sector, especially efforts to promote Việt Nam’s tourism abroad.

“Tourism in Việt Nam has seen great progress in the last year,” he said.

“Reasons for the success include the great potential of national tourism. We have beautiful destinations and attractive products, human resources, promotion and marketing, and infrastructure development.”

“I highly appreciate the appearance of strategic investors and leading tourism enterprises who have made great contributions to the development of products and service facilities, contributing to capacity building and competitiveness of the tourism industry,” he said.

Most recently, a tourism promotion programme was organised in the four European countries of Switzerland, Austria, Hungary and the Czech Republic from June 19-28.

Notably, this was the first time that Vietnamese tourism has been promoted in Hungary, which reported a rise of 30 per cent in the number of visitors to Việt Nam in 2017.

A series of activities has been also organised in four big cities in the Republic of Korea from June 18-25. Last year, Việt Nam welcomed 2.4 million Korean tourists, up 56.4 per cent from the previous year. In the first half of this year, over 1.7 million Korean visitors travelled to Việt Nam, soaring 60.7 per cent annually.

From July 1, tourists from the UK, France, Germany, Spain and Italy will enjoy visa exemptions for the next three years until June 30, 2021 when travelling to Việt Nam.

From September 25 to October 7, VNAT plans to hold tourism promotion activities in France, Spain, Italy and Germany in order to attract more tourists from these markets.

On the occasion, VNAT also launched a new website for international tourism promotion at www.vietnam.travel. The site is part of the latest e-marketing strategy by VNAT to attract more foreign tourists.

With a modern interface, the website provides necessary information for foreign tourists such as visa services, festivals, destinations and accommodation.

This is the first time Việt Nam has launched a website allowing the free download of travel guide books for foreign tourists in different languages.

An annual ceremony honouring leading travel enterprises will take place on July 9 in Hà Nội with the aim of encouraging organisations, businesses and individuals who have made great contributions to the national tourism industry.

It also helps build the national tourism brand and develop tourism into a key economic sector.

The awards will be granted to travel agencies, domestic tour operators, inbound and outbound tour providers, hotels and hospitality services providers and carriers in the country.

These are the most prestigious tourism awards granted by VNAT. The ceremony will be broadcast live on VTV6.

In the framework of the ceremony, a writing contest titled ‘Việt Nam – Timeless Charm’, organised by VNAT and Lao Động (Labour) Newspaper will wrap up.

Launched in October last year, the contest aims to draw engaging entries on the beauty of Việt Nam and its best tourism assets.

Many entries have been sent in by Vietnamese citizens and foreigners who visited or are living in Việt Nam. They provide thoughts and feelings about destinations, travel tips and suggestions to develop tourism.

The organiser will grant prizes for the 12 best written pieces by Vietnamese and foreign candidates.