​One of Southeast Asia’s best kept secrets is HCM City’s food scene: home to a veritable melting pot of local and international flavours found in the finest high-end restaurants and the lowliest streetside cafés. 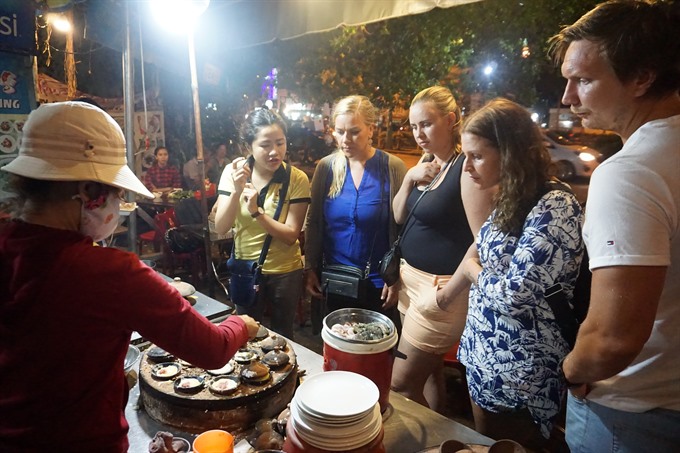 Foreign tourists at a street food stall in HCM City.

Since there’s something for just about everyone, the city has great potential to develop culinary tourism, according to Han Nguyen Nguyen Nha, former director of the Viet Nam Culinary Research Institute.

The city, which leads the country in the number of international tourists, is a culinary microcosm of the entire country.

Raw materials and products from the seas, rivers, lakes and forests are plentiful and can be easily sourced, sometimes even more so than in the local areas where the food items originated.

Moreover, leading travel companies such as Saigontourist and Vietravel operate in the city, and many schools provide training in tourism services and culinary careers.

Nguyen Quoc Ky, general director of Vietravel, said people from different localities and countries come to live and work in the city, resulting in a diverse culinary mix.

“This is a great advantage for the city to develop culinary tourism, but it has yet to be properly exploited,” said Ky, who is also head of the board that established the Viet Nam Culinary Culture Association.

Activities in the culinary tourism sector, for example, can include tours with culinary festivities, mixed-use restaurant complexes and showcases of specialty food.

Besides the beauty of the country, its world-famous cuisine is an important part of the country’s tourism brand and should be promoted, he said.

“Cuisine is increasingly seen as a brand ambassador for the country,” he added.

And in Japan, tourists are impressed with the sophistication and adherence to rules in the process of making sushi, sashimi, unagi and sake. The culture and traditions of Japan are crystallized in its food, and its culinary festivals and tours have received great attention from visitors.

“Viet Nam’s history, with its pains and victories, brought us a mixture of cultures from different civilizations,” said Paul Le, secretary of the Escoffier French Cuisine Association. “The food, mainly influenced by the French in the beginning, became extremely diverse and is an important vector of the unique Vietnamese lifestyle.”

“In HCM City, we have a large selection of ways for enjoying quality food, from light bites with friends on the street, to extraordinary gastronomical experiences with great chefs or even Michelin-starred chefs,” he added.

Besides excellent street food, the city is home to countless restaurants that serve a wide variety of traditional food and regional specialties. Besides the city’s burgeoning coffee shop scene, a wide range of international cuisine can be sampled, Le said.

Phan Thanh Long, director of the Rex Hotel in HCM City, pointed out that cuisine is an essential part of culture and helps tourists learn something about their destination.

On the river and on the streets

For years, travel firms in HCM City have been taking their guests to floating restaurants on the Sai Gon River where they dine on boats and enjoy the views of the city by night.

Rosmalin Pitipaln, 58, from Thailand, travelled on a Ben Nghe cruise ship during her two-day visit in the city.

“It was really a great experience for us to taste local food on the floating restaurant on the Sai Gon River. I could experience the hustle and bustle of the city centre, with its many skyscrapers and vehicles, and see the lights of the restaurants, bars and commercial centres,” she said.

Besides river tours, travel companies often take tourists on the back of motorbikes for tours of amazing food at local street stalls. The tours are guided by locals who delight in showing what the city has to offer.

Founded in 2014, the Saigon Food Tour company, for example, focuses on local food and lifestyle. During the motorbike tour, travellers are able to talk to locals and learn about their eating habits.

And, at the high-end Rex Hotel, food is a strategic tool that helps to promote its brand, with a menu of authentic Vietnamese cuisine developed to serve guests.

The hotel also offers guests a tour of a local market, where they choose ingredients for a meal, return to the hotel, follow the chef’s instructions, cook their own dishes and then enjoy the results.

In an action programme to make tourism as a spearhead economic sector, the city’s authority is focusing on its food sector, according to Lã Quốc Khánh, deputy director of the Department for Tourism.

The department has launched several annual culinary activities related to tourism promotion, including the Food Festival of the South, Southern Fruit Festival and International Food Festival.

It also plans to consult experts to develop a set of criteria to evaluate and classify catering establishments so they can reach high tourism standards.

In addition, the city plans to roll out a restaurant ranking to encourage restaurants and eateries to standardise their services.

Vietravel general director Kỳ said that food courts and food markets should be better organised and classified into different types of cuisine.

The food area at Chợ Lớn market in District 6, for example, should be developed as a Chinese food area, while a chain of restaurants that serve traditional dishes across the country could be a highlight of travellers’ tours.

Promoting local cuisine can be done through the media, while farmtrip delegations can be invited to sample the city’s cuisine, he said.

Cultural exchange activities and tourism events held in Viet Nam and abroad should also incorporate information about the country’s cuisine, he added.

The Viet Nam Culinary Culture Association, which is in its infancy, has promised to gather well-known culinary experts, restaurants, hotels and tourism companies to discuss ways to promote and preserve Vietnamese cuisine.

Giovanni J DelRosario, chef of the culinary arts at the Los Angeles Trade and Technical College, said that farmers’ markets and night markets in HCM City districts would help spur healthy eating and provide a wide variety of dining options.

He said that a comprehensive rating programme had been proposed, with the main focus on core factors such as food and beverage quality, process of service, staff behaviour, atmosphere, design and decoration, and sustainable development.

With the city’s new approach to tourism via its lively food scene, both HCM City residents and tourists are expected to reap the benefits of an ever-growing and more dynamic restaurant and travel market.