The Vietnam National Administration of Tourism has called for local travel agents’ registration for the 2019 ASEAN Tourism Forum Travel Exchange (Travex), which will be held in the northeastern province of Quang Ninh on January 16-18, 2019. 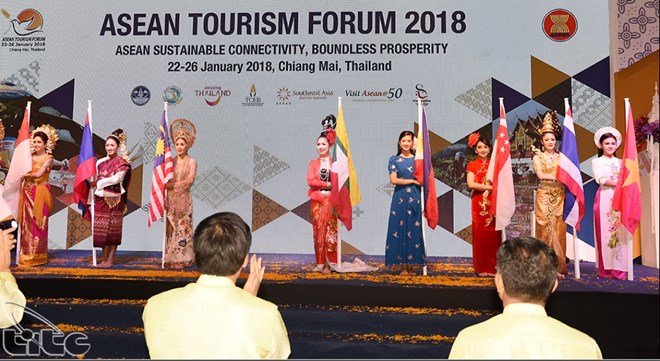 Travex is among the most long-standing annual travel fairs in ASEAN as part of the ASEAN Tourism Forum (ATF). Quang Ninh province will host the ATF 2019 from January 14-19 next year under the theme “ASEAN: The Power of One”.

The travel exchange will feature 450 pavilions of ASEAN nations, including 100 booths of host Vietnam.

It provides a platform for tourism firms of Vietnam and ASEAN to meet and strengthen cooperation with more than 400 international buyers and reporters from major tourism markets such as the US, Europe and Northeast Asia, among others.

First launched in 1981 in Kuala Lumpur, Malaysia, ATF is the biggest annual and alternated event under the ASEAN tourism cooperation umbrella with a view to promoting the Association of Southeast Asian Nations (ASEAN) as one tourist destination.

The hosting of ATF in 2019 creates a golden opportunity for Vietnam in general and Quang Ninh in particular to promote tourism.

A wide range of activities will be held as part of the forum such as formal meetings between officials of ASEAN National Tourism Organisation (NTO) and meetings between ASEAN tourism ministers and their counterparts from China, Japan, the Republic of Korea and India.

Vietnam boasts a long coastline, forests and mountainous regions with numerous magnificent landscapes. The country also has a long history and diverse culture with a variety of ancient architecture construction and wonderful legends.

In 2017, Vietnam welcomed nearly 13 million international tourists and 74 million domestic ones. In the first three months of 2018, the country greeted over 4.2 million foreign visitors, a year-on-year rise of 30.9 percent.

Quang Ninh has a coastline of more than 250 kilometres and over 2,000 islands and islets which account for two-thirds of the total number in Vietnam.

The province is hosting the National Tourism Year 2018 themed “Ha Long-Heritage, Wonder, Friendly Destination”, which will open in Ha Long city on April 28.

Ha Long Bay literally “descending dragon bay” is a must-see destination in Quang Ninh. It was recognised as a UNESCO World Heritage Site in 1994 and 2000.

The bay spans 1,553 square kilometres and includes 1,969 islands of various sizes. It features thousands of limestone karsts and islets in various shapes and sizes. The limestone in the bay has gone through 500 million years of formation in different conditions and environments. The geo-diversity of the environment has created biodiversity, including a tropical evergreen biosystem, oceanic and sea biosystem. Ha Long Bay is home to 14 endemic floral species and 60 endemic faunal species.

Located 80 kilometres from the mainland, Co To island is another attraction in the. The island district comprises Co To Lon (large Co To island), Co To Be (small Co To island) and 15 smaller islands. Besides enchanting beaches, the island has natural forests, lighthouses, parks, wharves, fishing villages, bays and a rock garden.

Yen Duc Village in Quang Ninh’s Dong Trieu district is one of the few villages in Vietnam that still retains its authentic lifestyle. Located along the highway between Ha Noi and Ha Long city in the Red River Delta, Yen Duc Village is the epitome of Vietnamese rural living with its charming rice fields, traditional houses and gardens and friendly locals.

As Quang Ninh’s most famous mountain, Yen Tu (meaning Bronze Pagoda) is appreciated not only for its natural landscape and stature but also for its significance as a historically preserved relic. It is located about 50 kilometres from Ha Long city.

In 2017, Quang Ninh received 9.87 million tourists, including 4.28 million foreigners, up 18 percent and 23 percent respectively. The tourism sector earned over 17.88 trillion VND (786.9 million USD), up 30 percent compared to the previous year, and contributed 3.2 trillion VND (140.8 million USD) to the State budget, accounting for 11.9 percent of the local budget collection.

Under the Overall Plan for Tourism Development, Quang Ninh strives to become an international tourism centre and a leading tourism destination in Vietnam with modern infrastructure and diverse, high quality and competitive tourism products.