On March 9, thousands of people joined in a carnival within the framework of the Buon Ma Thuot Coffee Festival in Dak Lak province.

The seventh Buon Ma Thuot Coffee Festival opened in the Central Highlands province of Dak Lak on March 9 under the theme “The Quintessence of Jungle”.

He suggested the province encourage and attract private investment in coffee re-cultivation besides increasing the application of science and high technology to boost productivity and quality, reduce production costs and adapt to climate change.

The locality should focus investment on deep processing industry and post-harvest preservation, he advised.

To reach the goal of turning Dak Lak into a world’s coffee destination, the official asked the province to expand markets and strengthen connectivity with friends around the world to draw more coffee lovers, experts, and manufacturers.

With a coffee area of over 200,000 hectares and an annual output of over 460,000 tonnes, Dak Lak is dubbed as the coffee capital of Vietnam.

The biennial festival aims to increase the value and position of Vietnamese coffee brand in the global market as well as honour coffee growers, processors and businesspeople.

An investment promotion conference will be held as part of the event to present cooperation opportunities in the province.

Other sidelines activities include an exhibition on the history of the world’s coffee industry, and a photo exhibition highlighting the 44th anniversary of Buon Ma Thuot Victory. 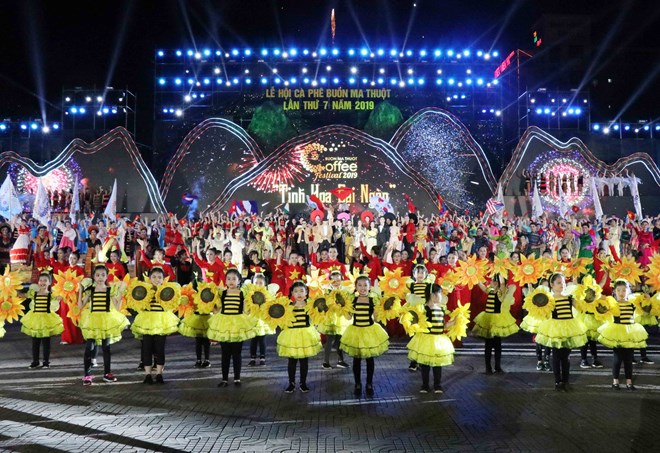 The closing ceremony of the festival will take place on March 16.

As part of the ongoing 7th Buon Ma Thuot Coffee Festival, a Coffee Trade Fair kicked off in Buon Ma Thuot city in the Central Highlands province of Dak Lak on March 9.

The fair features 800 booths of 230 businesses operating in the coffee sector, including 65 booths of 18 foreign enterprises.

An exhibition on the history of the world’s coffee industry also opened the same day at the Coffee World Museum in Buon Ma Thuot city. The exhibition forms part of the Coffee Festival.