Luck out at Lak Lake, pulse of the Central Highlands

The silence of Lak Lake resounded in contrast to vibrant Dak Lak, causing my heart to skip its surface like a stone. 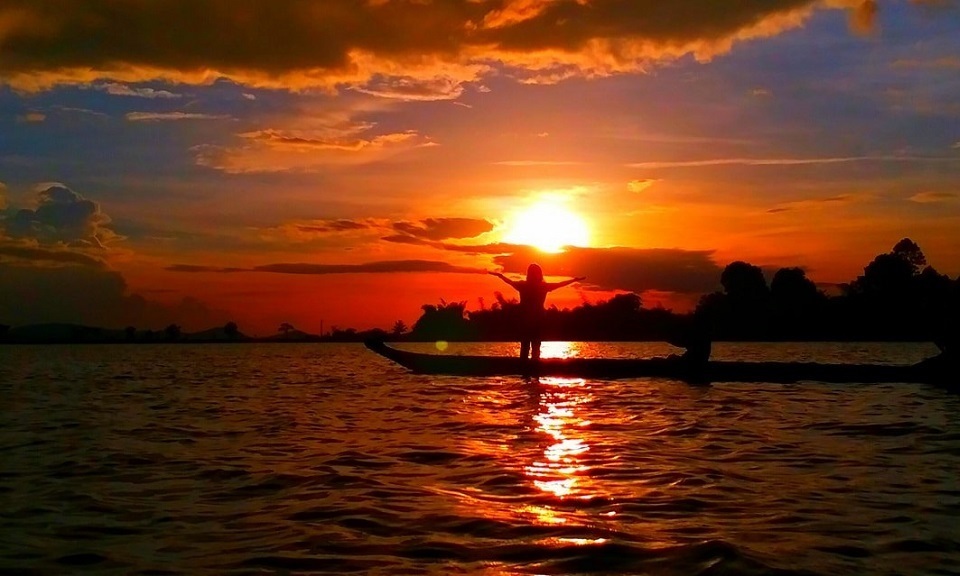 A tourist on boat watching the sunset in Lak Lake. Photo by Doan Xuan Son.

I headed to Dak Lak Province, a pepper, cashew and coffee growing hub in Vietnam’s Central Highlands, from its neighboring province Dak Nong at 7 a.m, via National Highway 14.

The road was engulfed in blooming wild sunflowers, set against a backdrop of pine trees. Lost in the mesmerizing beauty, I drove until 7 p.m., spending much longer than expected on the 122 km journey.

As I arrived in Buon Ma Thuot, capital of Dak Lak, I was stunned by its prosperity, boasting tall buildings, bustling streets and dense traffic. How could the town be this prosperous, with Dak Lak not a particularly wealthy province?

Arriving at The Highland House, with its cafe regularly frequented by local artists, I took a well-deserved rest to prepare for the next day’s Lak Lake experience.

Lak Lake is the second largest freshwater body in Vietnam after Ba Be Lake in the north. It is surrounded by tall mountains and vast natural forests. The area around the lake is home to ethnic M’Nong, who operate elephant-rides through the shallows.

The next day, I had an early breakfast with my Dak Lak tour guide and photographer friend Doan Xuan Son, fine tuned to all things special about Dak Lak.

At 7 a.m, traveling by motorbike, we passed a section of Nam Truong Son Range, famed for its role as North Vietnam’s logistic route during the Vietnam War.

Dissecting mountains, we finally reached Lak Lake, greatly resembling Tonle Shap Lake in Cambodia, Southeast Asia’s biggest freshwater body. Instead of living on small boats in the middle of the lake like in Cambodia, Lak Lake locals settled near the shore.

A middle-aged M’Nong woman from nearby M’Lieng Village of Lak District told us many legends related to the lake’s name. According to one story, once upon a time, a local M’Nong named Y Lak caught a small, sacred eel that grew incredibly in size, vastly expanding the water body forming its habitat. Locals subsequently named the lake Y Lak’s water (Dak of Lak), which paved the way for the present Lak Lake.

As we first boarded the boat, I was informed elephant-rides cost VND300,000 ($13) for two over 30 minutes, an offer I declined after considering how these majestic animals are often made to suffer for human pleasure.

After leaving Lak Lake, Son took me to Buon Jun, a nearby M’Nong village with plenty of ethnic handicraft items on offer. Fascinated, I scooped myself an ethnically inspired hat before leaving for less frequented M’lieng, one of the oldest local villages.

As we arrived, what struck me most was the tattered roofs barely shielding the stilt houses against the Central Highlands’ harsh weather. Sheltered under the eaves were many poor families with a plethora of children.

Dressed in tattered clothes, five-month-old A Dai stood on a corner, his sun-darkened mother feeding him rice in the absence of milk, which his family cannot afford.

The story broke my heart, representing not only a single family, but a whole village and community.

*Notes on traveling to Dak Lak

By air: This is the safest method to get to Dak Lak. You can fly to Buon Ma Thuot Airport from Hanoi, Da Nang or HCMC via multiple carriers. The price rarely exceeds VND1 million ($43) one way, despite fluctuating through the year.

By motorbike: It is the greatest way to explore Dak Lak, granting you the ability to reach almost every destination. The route here is pretty well constructed, unless you travel to remote villages.

Lodging: There are multiple hostels and homestays throughout Dak Lak due to recent tourism development. As the quality of lodgings may fluctuate, it is recommended to do a bit of research beforehand. However, I would recommend The Highland House where I stayed, with both dorm and private lodging options, ranging from VND120,000 ($5) to VND500,000 ($21).

Tour guide: My experience in Dak Lak would not have been complete without the help of Doan Xuan Son, the most helpful and friendly tour guide I have met throughout my journey across Vietnam. If you need a guide, please don’t hesitate to give him a call at 0966 499 400.

Food: Dining in Buon Ma Thuot is as diversified as any other locality in Vietnam. You should try a variety of special dishes like red vermicelli, mini savory pancakes, and fried sticky rice, etc.

Time: You should visit Dak Lak during the dry season from December to April. In December, there are wild sunflowers in bloom and local festivities. Coffee flowers bloom most beautifully from February-end to early March. The rainy season, from May to November, should be avoided due to frequent landslides.

Caution: Outside Buon Ma Thuot lies many ethnic villages – it is advised to always respect local customs and avoid causing offence by being underdressed.

As you travel deep into Dak Lak, dirt roads may frequently get muddy, so please refrain from wearing any valuable footwear.

Finally, as Dak Lak hosts a large number of migrants from other provinces, please be cautious of passing strangers, who may try to scam you.