A representative office of the Japan National Tourism Organisation (JNTO) was launched in Vietnam on March 28 as part of the two countries’ effort to boost bilateral tourism cooperation. 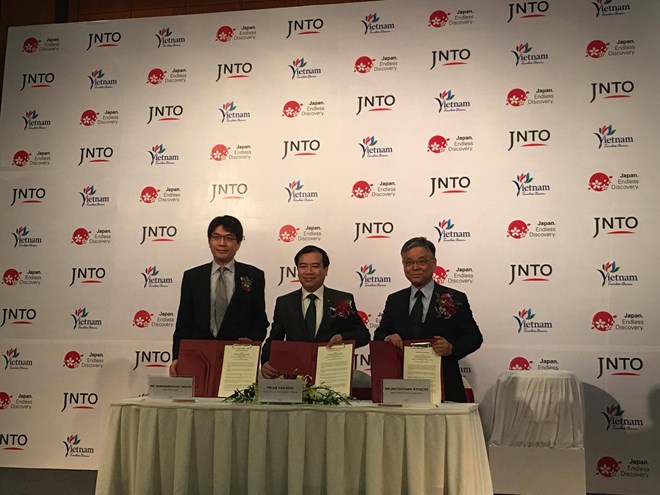 At the launching ceremony

During the opening ceremony, the Vietnam National Administration of Tourism (VNAT) and the JNTO inked a Memorandum of Understanding to enhance destination promotion and visitor exchange; and share experience and information on areas of mutual interest.

Speaking at the event, VNAT Director Nguyen Van Tuan gave attendees an overview of development in Vietnam-Japan tourism cooperation from 2010 to 2016.

Vietnam recorded an average growth rate of 9 percent annually in the number of Japanese tourist arrivals over the past 6 years. In 2016, the country welcomed approximately 740,000 visitors from Japan, up 10 percent from a year earlier, Tuan said.

Meanwhile, as many as 233,000 Vietnamese holidaymakers travelled to Japan last year, a year-on-year increase of 26 percent, he added.

He noted the opening of the JNTO representative office in Vietnam is expected to fuel the tours between the two countries.

For his part, JNTO President Ryoichi Matsuyama said the organisation plans to launch dozens of tours to Japan so that Vietnamese travellers can experience different cultural aspects of Japan like cuisine, cherry blossom and festivals.

The office is scheduled to join the 2017 Vietnam International Travel Mart on April 6-9.