The People’s Committee of Can Tho city, the Novaland Group, the Boston Consulting Group (BCG), and the Military Commercial Joint Stock Bank (MBBank) have teamed up to implement a project on developing the Mekong Delta’s tourism adapted to climate change. 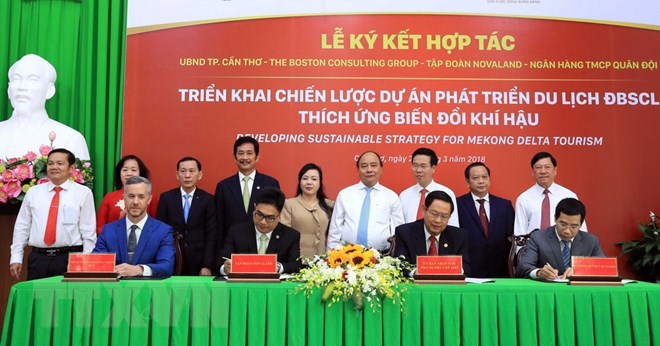 Prime Minister Nguyen Xuan Phuc (back, fourth, right) witnessed the signing of the cooperation agreement in Can Tho on March 27

They signed the cooperation agreement in Can Tho on March 27 in the presence of Prime Minister Nguyen Xuan Phuc.

The project aims to build and carry out a strategy for tourism connectivity and development of the 13 Mekong Delta localities with Can Tho city playing the key role.

The parties in this project hope to build suitable models to international standards to tap into the Mekong Delta’s tourism potential while preserving local cultural identities. They also look to improve tourism services and public awareness of environmental protection and help small- and medium-sized enterprises create more jobs for local people.

The Mekong Delta is the biggest rice, fruit and aquatic production hub of Vietnam. However, it is also one of the Vietnamese regions most vulnerable to climate change.

BCG Managing Director in Vietnam Christopher Lewis Malone said when it is optimised, the Mekong Delta could be a gem of Vietnam’s tourism that is comparable to some of the world’s famous river tourism destinations like the Nile Delta in Egypt.

A preliminary estimate of the BCG shows that an additional 300,000 jobs could be generated in the tourism sector by 2025, giving the important diversity to the economy and livelihoods of residents in the Mekong Delta.

The cooperation among the Can Tho People’s Committee, Novaland, BCG and MBBank is expected to connect and attract international organisations like the World Bank, the International Finance Corporation, and the Asian Development Bank to fund climate change adaptation in the Mekong Delta.

Appreciating the parties in the project, Prime Minister Phuc said it is a must to turn risks into opportunities and challenges into actions in the Mekong Delta. He said he encourages ideas of developing eco-tourism and community-based tourism and bringing into play the Mekong Delta’s identities.

He voiced his belief that with the BCG’s prestige and network, the firm will help the Mekong Delta become a magnet for domestic and foreign investors.