The tourism sector’s target of receiving 13 million foreign travelers in 2017 is within reach as more Chinese and South Korean visitors are coming to Vietnam. 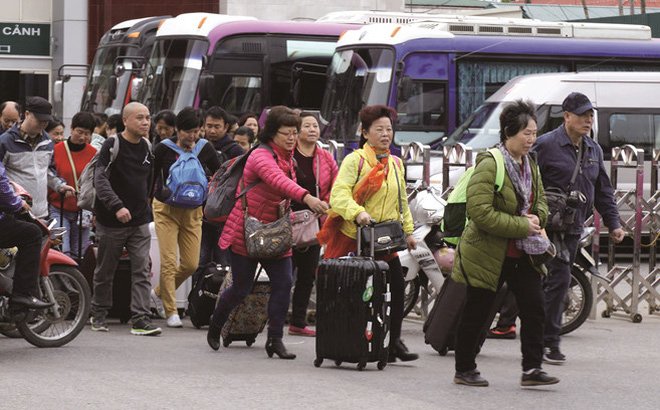 According to the Travel Department, 9.45 million foreign travelers came to Vietnam in the first nine months of the year, up 28.4 percent compared with the same period last year.

However, general director of the Vietnam National Administration of Tourism (VNAT) Nguyen Van Tuan said Da Nang not only is a ‘bright spot’ but also a ‘hot spot’ for problems caused by growth.

The central city, which has one of the six most beautiful beaches on the planet, has received 1.4 million foreign travelers this year, an increase of 40 percent over the same period last year. This included 1.2 million travelers coming on chartered flights.

Tran Chi Cuong, deputy director of the Da Nang Tourism Department, attributed the hot growth to the sharp increase in the numbers of travelers from China and South Korea.

More South Korean travelers are flying to Da Nang thanks to the direct air routes connecting Da Nang with Seoul, Pusan and Jeju, with 85 flights a week.

The number of travelers coming on cruise ships also increased by 64 percent in the first half of the year.

However, many foreigners, mostly from China and South Korea, have entered Da Nang illegally to provide travel services or work as tour guides.

Meanwhile, as Vietnamese travel firms’ capacity and financial capability remain weak, they are at a disadvantage when working with foreign partners.

Some of them have been discovered lending a hand to foreigners who are offering services illegally. The conflicts among the groups of individuals and institutions that provide services are on the rise.

Tuan said the hot development will increase conflicts as the demand has exceeded supply. Da Nang has been asked to take a flexible approach and avoid hurtful measures.