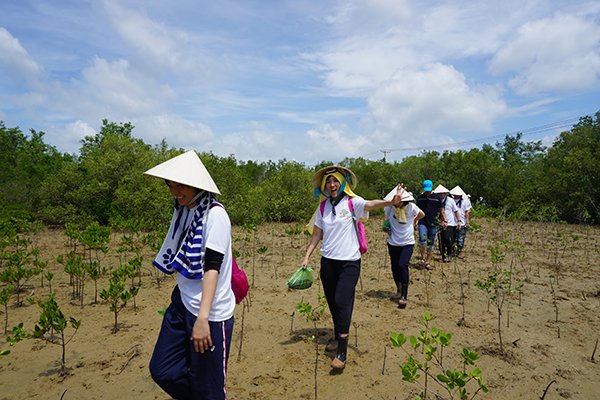 Female Japanese tourists learn to grow trees during a charity tour in Can Gio District, HCMC

Japan is currently the third largest visitor-generating market for Vietnam’s tourism after China and South Korea. Nearly 600,000 Japan tourists visited Vietnam this year to date, up 7.8% year-on-year. The number is expected to increase to 810,000-820,000 at the end of this year.

The Japanese market may not grow as strongly as China and South Korea but will have a steady growth in the coming time, so the target is achievable, Huong added.

After the trip, local travel companies said potential products include sea tourism, MICE (meetings, incentives, conferences and exhibitions) and golf tourism. Danang is the most attractive destination for Japanese guests.

At present, domestic air carriers have plans to increase regular flight frequencies and launch new chartered flights between the two countries. Tickets for low-cost flights from Danang and Hanoi cities of Vietnam to Japan launched early last month have been nearly sold out.

According to data of the Vietnam National Administration of Tourism, Vietnam welcomed nearly 976,000 international arrivals last month, growing 18.6% against the year-ago period.

In January-September, foreign arrivals rose 28.4% to 9.4 million. China remained Vietnam’s largest market with more than 2.9 million tourists, up 47.7% year-on-year, followed by South Korea with 1.7 million guests and Russia with over 420,000 arrivals, increasing 51.2% and 40.6% respectively.