A visit to the land of golden pagodas

It is not necessary to take a flight to Thailand to admire the land of golden pagodas, as Vietnam has a similar region known for its ancient golden pagodas – Tra Vinh, a province in the Mekong Delta. 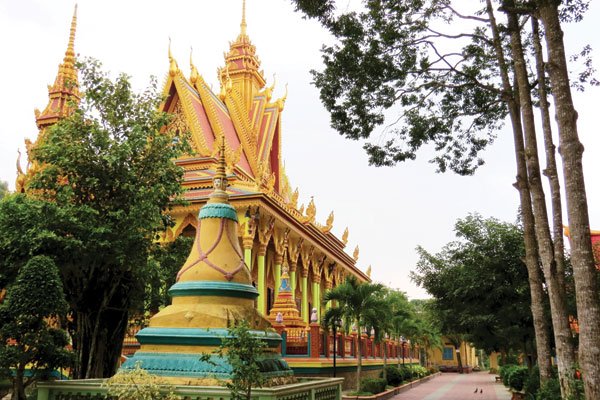 Yellow is a typical color of pagodas in Tra Vinh

Tra Vinh is home to hundreds of pagodas with their typical golden color and some of these constructions have had a longer history than the birth of the locality.

Tourists can find most of these pagodas along National Highways 60, 53 and 54, next to the banks of the Co Chien River.

As one of the nine branches of the Mekong River, the Co Chien helps beautify and enrich the land.

All of these pagodas have the same typical color of yellow and exclusive architecture and sacred objects and altars which were created by Khmer people. Many ancient pagodas are not in its original shapes after several times of restoration to expand their areas.

An old monk in Hang Pagoda, speaking about the history of the pagoda, says that pagodas in Tra Vinh are not only religious places but also living and cultural places for the community.

Pagodas in the locality are also places for birds and animals coming to live. Thus, there are pagodas for bats, birds and storks in Tra Vinh.

Tourists visiting pagodas of Khmer people in Tra Vinh will have pleasant and peaceful feelings when admiring the landscape and listening to helpful information about the architectures and the cultures dating back to thousands of years ago.

Most of the Khmer pagodas in Tra Vinh have no doors, meaning such venues readily welcome everybody who comes to the sites with good wills.