Can Tho city works to foster tourism development

Leaders of the Mekong Delta city of Can Tho had a working session on June 12 with representatives of the Boston Consulting Group (BCG) to discuss plans and measures to promote tourism development in the city and in the whole region. 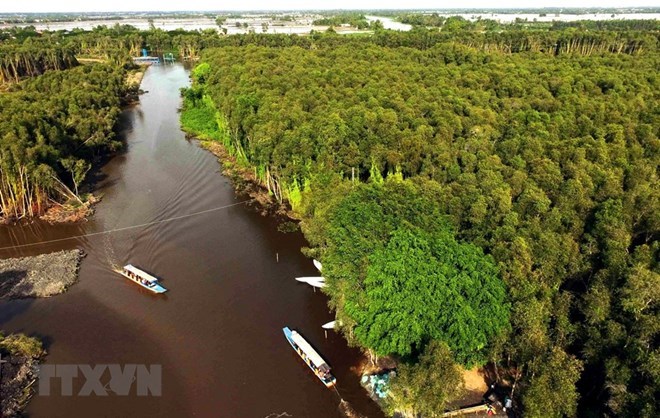 An aerial view of Tan Lap floating village, an eco-tourism area in the Mekong Delta province of Long An (Photo: VNA)

Under the master plan for tourism development until 2020 with a vision to 2030, the Mekong Delta is expected to become one of the seven key tourism regions of Vietnam.

Many provinces and cities in the Mekong Delta have worked out plans and schemes for tourism development. However, the progress remains slow, while investment and exploitation are not connected effectively at the regional level.

According to statistics from the Vietnam National Administration of Tourism, the region welcomed over 20 million holiday-makers in 2017.

Each tourist visiting the Mekong Delta spends about 22 USD per day, 75 percent less than the average in the country. Overall, the annual growth of tourism sector in the region is 9 percent, while those in other tourism regions always reach two-digit level.

Christopher Lewis Malone, BCG Managing Director in Vietnam, noted that traffic connectivity is one of the reasons causing difficulties for the Mekong Delta’s tourism sector.

Can Tho International Airport is planned for the whole region, but only four localities are connected to the airport. In the field of waterway tourism, Ninh Kieu wharf of Can Tho only serves about 4,000 visitors per day, while Ha Long port of Quang Ninh province averagely serves 22,000 visitors per day.

More importantly, the Mekong Delta is not a main destination for visitors, but is just a stopover of tourists en route to Ho Chi Minh City – the largest economic and cultural hub in the southern region.

The Mekong Delta also faces many negative impacts of climate change. Rising sea level, saline intrusion, droughts, landslides have been occurring and have seriously affected the economic development and the life of regional people as they destroy natural resources and make it difficult to promote tourism potential.

This fact requires a new vision and comprehensive measures for the region to promote sustainable tourism development, Malone said.

The BCG selected Can Tho city as its direct partner in the project and hoped the city would become a diring force in promoting tourism development in the whole region, he added.

At the working session, representatives of the BCG proposed four groups of measures to push tourism development in the Mekong Delta in the coming time, focusing on developing tourism along rivers; sightseeing tours and those to historical sites, learn about local customs and cuisine and enjoy daily life of locals; and adventure tours with diverse games such as canoeing on rivers, exploring the regional land with hot air balloons.

Regarding tourism infrastructure, Malone stressed that it is necessary to expand and connect air routes between Can Tho, Phu Quoc, Ca Mau and Co Ong airports to establish a strategic transport system throughout the region.

Chairman of the municipal People’s Committee Vo Thanh Thong stressed that the project plays an important role in the overall development of the region.

He hoped many suitable models will be built within the framework of the project to help the Mekong Delta become a leading destination in Asia in terms of tourism on rivers.

The city is working with Novaland Group to finance tourism development  projects in the Mekong Delta that are invested directly in Can Tho, Vinh Long province and other localities in the region, Thong added.

The projects are hoped to create a momentum for sustainable development and create jobs for local residents, contributing to socio-economic development of the locality and helping it attract more investment, he said.-VNA