The 5th Mekong Delta investment forum (MekongInvest 2017) took place in Can Tho city on October 25 to call for investment in tourism projects across 13 regional localities. 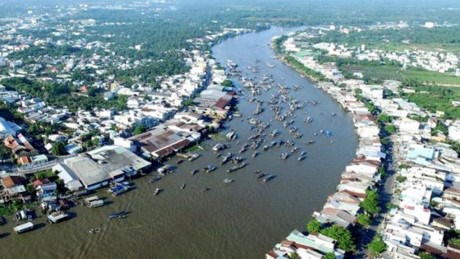 An overview of Cai Rang floating market, a tourist destination in the Mekong Delta (Photo: SGGP)

Thirty-three realty and tourism projects, with total capital amounting to nearly 7.8 trillion VND (343.2 million USD), were introduced at the event.

Speaking at the forum, Nguyen Tri Hieu, an economic expert, said local tourism falls short of potential due to incomplete infrastructure, limited air and waterway travel services, and a lack of other services serving tourists’ demand for entertainment and health care.

Hieu said the sector is in need of strong investment to grow and noted investors want more support from local authorities to access favourable policies and planning information.

Vo Hung Dung, Director of the Vietnam Chamber of Commerce and Industry (VCCI)’s branch in Can Tho, said the delta is earmarked to accommodate 100,000 rooms by 2030, of which about 30 percent was ranked three – five stars.

He pointed to the fact that the region now has just about 60 three- and five-star hotels that accommodate a total of 8,000 rooms, mainly in Phu Quoc island and Can Tho city.

The region is home to only two major entertainment complexes, one large-scale rest stop and no regional-scale shopping centre, he added.

As heard at the function, in the past eight years, Mekong Delta’s tourism grew over an average of 10 percent annually.

The MekongInvest is held annually by the VCCI and the Investment and Trade Promotion Centre in the Mekong Delta.-VNA