The Ministry of Culture, Sports and Tourism has just asked authorities in Khanh Hoa Province to intensify the management and monitoring of foreign tourists in the area. 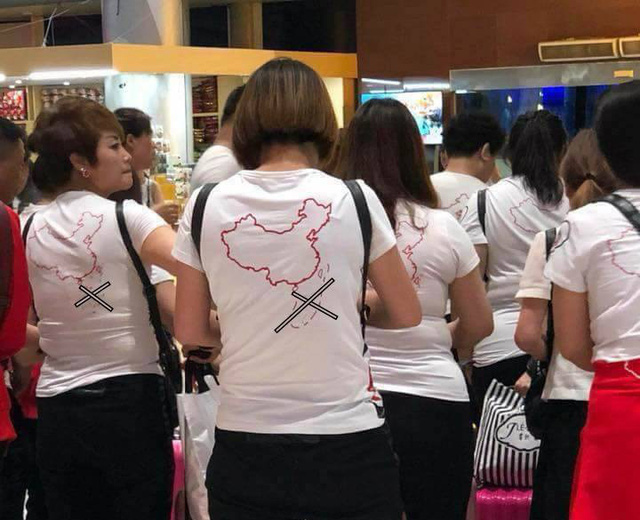 A group of Chinese tourists wear T-shirts with the illicit ‘nine-dash line’ map.

Head of the Security Police Department at Cam Ranh International Airport, Nguyen Van Quan, said that the group of 14 tourists arrived at the airport on the evening of May 13 on a tour operated by Aladdin Co. Ltd. in Nha Trang City.

“After completing immigration procedures, the tourists went out to wait for buses to Nha Trang,” Quan said. “They took off their coats and only wore the T-shirts. We immediately asked them to change their clothes and confiscated all their T-shirts.”

A representative from the tour company said that the tourists came from Xi An City in China and it was not until they had passed immigration that the company’s tour guide realised their clothes featured the map.

“The tourists said that they found the T-shirts beautiful and bought them as their uniforms for the tour at a market in China,” Aladdin’s representative said. ‘We asked them to change shirts and confiscated all the T-shirts at the airport to be handed over to the authorities.”

When asked about the call to expel these tourists, Quan said on May 15 that they have reported the case to the Ministry of Public Security and is waiting for further instructions.

In 2014, a Chinese couple were also caught attempting to bring bundles of world maps showing the illicit ‘nine-dash line’ into Vietnam through the Moc Bai Border Gate in the southern province of Tay Ninh.

The ‘nine-dash line,’ is a widely-rejected cow tongue-shaped line illegally created by China to claim its sovereignty over about 80 percent of the East Vietnam Sea, including the Paracel and Spratly archipelagos.

Vietnamese authorities have consistently rejected China’s territorial claims with its absurd imaginary line, as they are not based on any legal foundation and violate the 1982 United Nations Convention on the Law of the Sea (UNCLOS).