The ASEAN Tourism Forum 2019 (ATF 2019) will take place in Ha Long City, the northern coastal province of Quang Ninh, from January 14-18 next year, themed “ASEAN – the Power of One”. 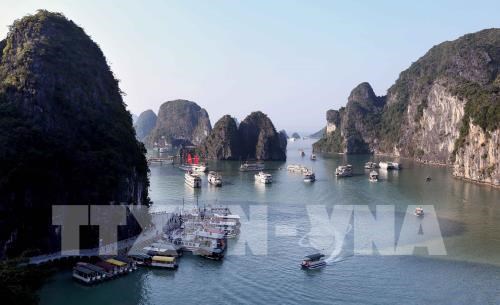 As the second event of its kind in Vietnam, the forum is expected to help Vietnam promote its beautiful landscapes, cultural identities, traditions and history to international friends.

According to the Vietnam National Administration of Tourism under the Ministry of Culture, Sports and Tourism, the event aims to concretise cooperation among ASEAN countries, towards the ASEAN region “One Vision, One Identity, One Community” with the goal of prosperity and sustainable development.

Various activities will be held during the forum such as the meeting between ASEAN tourism ministers, meetings between officials of ASEAN National Tourism Organisations (NTOs), the ATF Travel Exchange (TRAVEX) and more.

The meeting of ASEAN tourism ministers will focus on measures to enhance competitiveness, standardise and develop human resources for tourism and promote sustainable tourism.

TRAVEX, the annual specialised tourism fair, is expected to provide opportunities for local tourism firms and their partners from key markets to boost ties and promote their products.

Ceremonies to announce the book “Tourism stories” in Vietnam and to present the ASEAN Tourism Award will be included in the forum.

First launched in 1981 in Kuala Lumpur, Malaysia, the ATF is the biggest annual event of ASEAN tourism cooperation, which aims to promote ASEAN as one tourist destination with sustainable development.

Since 1998, Vietnam has participated in the ATF, as well as meetings and activities in the framework of the forum.

It joined national tourism agencies of the ASEAN member nations in detailing the action programme for the implementation of the ASEAN tourism agreement, which focuses on opening the tourism market among the ASEAN countries, improving the quality of tourism services, human resources development and safe tourism.

The ATF in Vietnam in 2009 approved many important initiatives and proposals, contributing to bolstering tourism cooperation among regional countries.

In recent years, Vietnam has become known as a tourist destination with dynamic development, which is highlighted by its unique cultural and historical values, beautiful natural scenery and friendly people.

The country aims to develop tourism into a spearhead economic sector in the national economy. In 2017, Vietnam welcomed 13 million international tourists and served 74 million domestic visitors.

In the first half of this year, foreign arrivals to the country reached nearly 7.9 million, up 27.2 percent from the same period of 2017.

Quang Ninh has a coastline of more than 250 kilometres and more than 2,000 islands and islets which account for two-thirds of the total number in Vietnam. The province hopes to welcome 12 million visitors this year, including five million foreigners and earn 22 trillion VND (968 million USD) in tourism revenue.

Ha Long Bay, literally “descending dragon bay”, is a must-see destination in Quang Ninh. It was recognised as a UNESCO World Heritage Site in 1994 and 2000.

The bay spans 1,553 square kilometres and includes 1,969 islands of various sizes. It features thousands of limestone karsts and islets in various shapes and sizes. The geo-diversity of the environment has created biodiversity in the bay, including a tropical evergreen biosystem, oceanic and sea biosystem. Ha Long Bay is home to 14 endemic floral species and 60 endemic faunal species.