Promotion has become more crucial than ever for tourism development in a globalised, competitive market, Vice Minister of Culture, Sports and Tourism Huynh Vinh Ai said. 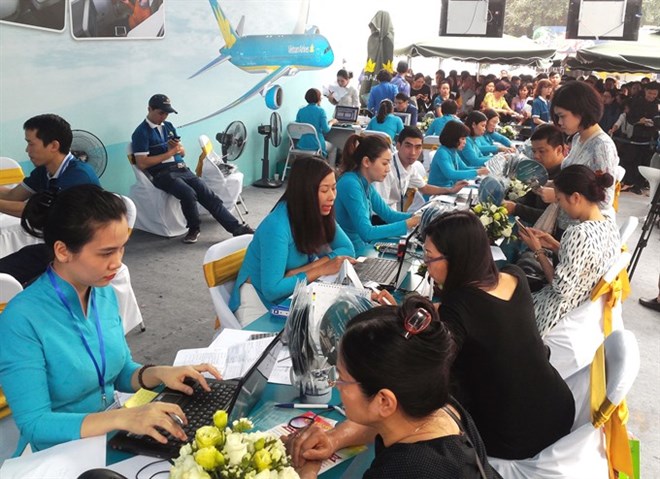 Addressing the opening ceremony of the Vietnam International Travel Mart (VITM) Hanoi 2017 at the Friendship Cultural Palace on April 6, he noted greater professionalism in organising the event, as also more efficient mobilisation of social resources.

This would uphold the capital city’s status as a national and regional tourism hub, Ai said.

As many as 650 enterprises and tourism management and promotion agencies from across Vietnam and 25 other are participating in the fair that will close on April 9.

Around 60,000 visitors are expected to attend the country’s largest annual travel and tourism exchange event, which focuses this year on the theme: “Hanoi – Destination of Vietnam.”

Besides the participation of firms from traditional markets like Japan, Korea, Western Europe and ASEAN, the presence of travel agents from the American Society of Travel Agents (ASTA) would open up opportunities for Vietnamese tourism businesses to build networks, said Vu The Binh, Vice President of the Vietnam Tourism Association, chairman of the organising committee.

Over 150,000 low-cost air tickets and 20,000 package tours at reasonable prices are being offered by travel companies and airlines at the fair.

In fact, the company’s Hanoi -Ha Long-Sunderworld Park tour, which was offered with a 20 percent discount, sold out in the first 10 minutes, she said.

She attributed the tour’s popularity to added curiosity about the location where some of the principal footage of the Hollywood blockbluster, Kong: Skull Island, was filmed.

Local resident Nguyen Hoang Long told Vietnam News that he had waited from 7am in the queue to buy a promotion ticket offered by Vietnam Airlines for its Hanoi – Da Nang route, with round trips costing just 1 million VND (44 USD), 40 percent cheaper than normal.

VITM 2017 is organised by the Vietnam Tourism Association, in collaboration with the Hanoi People’s Committee and Vietnam National Administration of Tourism, Ministry of Culture, Sport and Tourism.