Travel firms run race to sell tours to US

Traveling the US has become more realistic as travel firms have slashed tour fees. 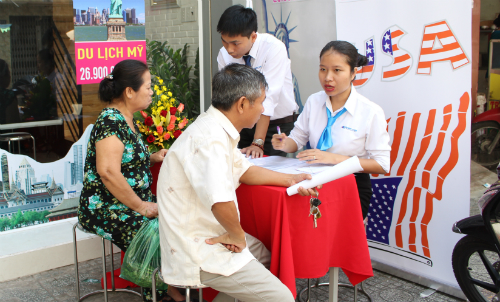 Traveling the US has become more realistic

After advertising an 8-day, 7-night tour to the US with the fee of VND27 million, the travel firm on Ngo Quyen street in district 10, HCMC, on November 28 received 30 guests who came to ask about the tour.

“In the past, people did not think of touring the US because of the high tour fee. But they were more interested in the tours we offer,” said Nguyen Bao Son, director of Saigon Star.

Tours to the US are among the most expensive. A tour which lasts 5-7 days would cost VND40-90 million, including air tickets. The cheapest tour to the West Coast costs up to VND35 million. Meanwhile, tours to both the East and West Coasts would cost no less than 50 million in the low season.

However, the tour fees have been decreasing recently as travel firms compete to attract travelers. Tugo, a young tourism firm, is selling 7-day tours to the West Coast at less than VND30 million, including return tickets.

Most recently, Saigon Star has offered tours with the fee of VND26.9 million. According to Son, his firm can offer such a reasonable price because of cooperation with air carriers.

Vietravel doesn’t compete with other firms in price, but favors travelers to Europe and the US. According to Viet Thao, a senior executive of the company, Vietravel is offering visa fees to clients who book tours to Europe, Australia and the US 70 days before departure for up to VND3.7 million.

The battle of travel firms to sell tours to the US has, to some extent, affected air ticket booking agents. Many families who want to visit relatives in the US now buy tours to the US rather than book air tickets themselves.

Saigon Star, for example, fixes departure days, but does not fix the return days, because 80 percent of clients want to stay in the US for one or two months with their relatives.

The airfare for the flights to the US is about $1,000, or VND22.5 million. Therefore, travelers are willing to pay nearly VND10 million more to buy tours.

Son said his firm had booked 700 travelers to the US in the last six months.

According to the Vietnam Tourism Association, 6.5 million Vietnamese traveled abroad in 2016 and spent $7-8 billion. Spending per capita was $1,230 on outbound tours, an increase of 15 percent over 2015.