Travelling by train to relax and enjoy the view out the window is a pleasure for many travelers, and two train routes in Vietnam with stunning views were recently selected among the ten best train journeys in Asia by the UK-based newspaper The Telegraph. 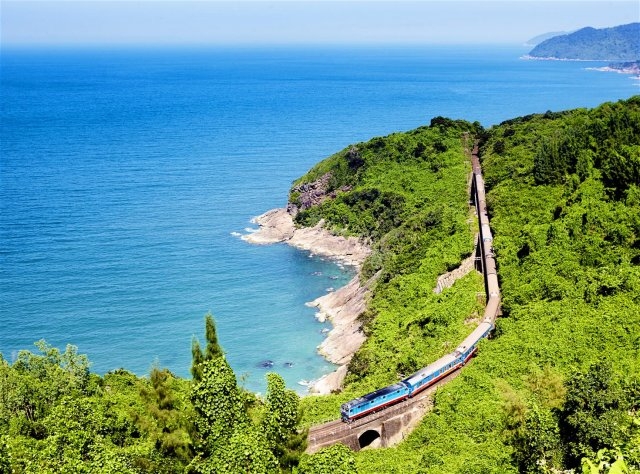 The 1,600-km (1,000-mile) journey passes through a pastoral parade of pagodas, paddies and farmers wearing conical hats, together with beaches and mountains, The Telegraph wrote.

Moreover, travelers can hop off along the way to relax at beach resorts in Nha Trang and the endless swathes of sand in Da Nang, Vietnam’s third-largest city, where they can also take in the beautiful Chinese, European, Japanese and Vietnamese architecture in the World Heritage Site of Hoi An ancient town.

The north-south trip costs $37 for a soft seat and $55 for a sleeper, both in air-conditioned cabins.

Travel publisher Rough Guides also named the route one of the most scenic in Asia last year, where one can watch buffalos grazing in rice paddies and fishermen casting their nets in the sea as well as deserted white beaches and lush rainforests.

Meanwhile, the 563-km mountainous route from Hanoi to Kunming in China is also a great experience, with mountains and terraced rice fields, and found a place on the list.

The route was opened by the French in 1910 and was at various times bombed, re-routed, and closed by landslides until it reopened in 2014.

The 16-hour journey in a soft sleeper cabin through the rice terraces of Sapa, Vietnam’s premier hiking territory, costs from $34.

The other Top 10 train journeys on The Telegraph’s list propels travelers through the jungles of Malaysia and Thailand, mosques and temples in Bangladesh, plantations in Sri Lanka, from the suburbs of Mumbai to palm forests in the countryside, from Indonesia’s bustling capital of Jakarta to its cultural capital Yogyakarta, from Beijing to Shanghai, and from Yokohama to Shimoda in Japan, with wonderful views of Mt. Fuji.

Vietnam’s first railway line was built by the French in 1881, running 70 km (43 miles) from then-Saigon to My Tho in the Mekong Delta.

A north-south line of more than 3,000 km was built over the following decades.

Rail transport has faded rapidly in Vietnam over recent years, given the little attention it has received and the rise of cheap air travel.

Earlier this month it added five-star trains on its Hanoi-Ho Chi Minh City service and piloted a service offering free meals to passengers.

Some private train companies have also been trying to revive the romance of train travel, offering first-class trips with restaurant cars, such as the five-star services launched last year from Ho Chi Minh City to Nha Trang and from Hanoi to Sapa.