The number of South Korean tourists to Vietnam has been on the rise in the past two years thanks to more convenient flights. 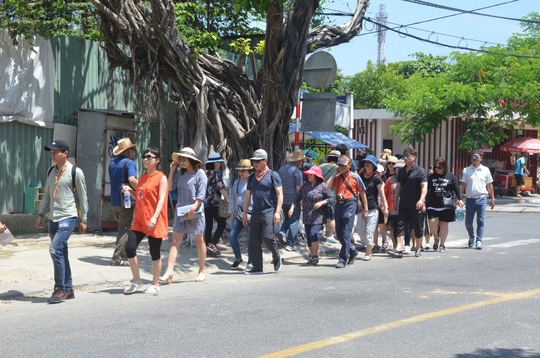 Vietnam welcomed 2.4 million tourists from South Korea last year, a 56.4% increase on 2016 according to the General Statistics Office. About 5.5 million international tourists came to Vietnam in the first four months of 2018, including 1.17 million South Koreans, a 67% increase on last year. South Koreans are second behind China in terms of tourist numbers and the central region is their favourite destination.

Statistics from the Danang Department of Tourism show that the city welcomed 1.3 million South Korean tourists last year, double the previous year. During the Reunification Day Holiday on April 30, well-known destinations received hundreds of visitors daily. Many restaurants in Danang have Korean on their signs. Eight airlines have direct South Korea flights which may be the major cause for the surge of visitors.

“Many tourism firms in South Korea chose Vietnam because of nice beaches, a wide range of food and cultural sites. Many local airlines have cooperated with South Korean partners to provide more services,” Son said.

However, Son said they were targeting European visitors. He said South Korean visitors had flocked to Thailand and Indonesia for only a while and worried that they would stop coming to Vietnam in near future.

The sudden surge of tourists also has some drawbacks. Nguyen Anh Toan, a tour guide in Danang said the number of guides that know Korean was lacking so they can only receive small groups.

Booked tours to Vietnam also increased. Fiditour reported a 45% increase in 2017 thanks to many destinations that have been recognised by UNESCO and socio-political stability. Tran Thi Thu Bao, head of the Department of Communication and Marketing of Fiditour, said, “The high number of visitors from South Korea helps Vietnam become less dependent on other markets and boost local tourism sector.”

However, the services and products still need much improvement if Vietnam wants visitors to stay longer and spend more. South Korean visitors prefer to travel to multiple locations in a short time so the destinations should be close to each other on the same route. Combined packages like eco-cultural tourism and locations to explore culinary culture will make Vietnam more interesting.