The Viet Nam Post and Telecommunications Group (VNPT) and the Viet Nam National Administration of Tourism (VNAT) agreed to promote smart tourism in the country. 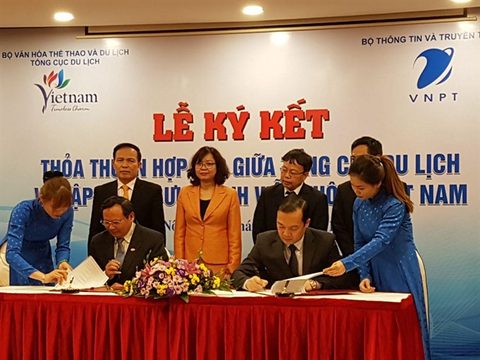 They signed a comprehensive co-operation agreement in this regard in Ha Noi on Wednesday.

Under the three-year agreement, the two sides would support each other in their development. They would annually build suitable co-operation programmes to advertise the country’s tourism sector to local and foreign tourists by applying modern IT solutions and services.

VNPT would consult and co-operate with VNAT to build a master plan on IT application for the Fourth Industrial Revolution in the tourism sector and to build a development plan for smart tourism.

In addition, the two sides would build an IT management system to connect information among localities in developing tourism. They would build digital products to serve tourists and promote tourism through e-marketing.

Speaking at the signing ceremony, Pham Duc Long, VNPT’s general director, said the group has a co-operation with 52 cities and provinces, as well as 10 ministries in several sectors to develop e-governance, IT applications in management and to provide smart IT applications.

“The tourism sector has been one of our most important customers. Currently, VNPT has been leading in launching smart city solutions for 15 cities and provinces nationwide, including big localities such Ha Noi and HCM City,” Long said.

He added that the sector was seeing a strong growth and expected a boom in the time to come. VNPT hoped to contribute to the boom.

Many localities, which signed co-operation agreements with VNPT in smart city development, have paid attention to tourism development. Last month, the group signed an agreement with Saigontourist to develop smart tourism.

VNPT is expected to accompany the sector for a long-term period to take advantage of the Fourth Industrial Revolution to further develop the country’s tourism, while meeting the tourists’ increasing demand.

Nguyen Van Tuan, VNAT’s general director, said tourism and IT had been two different sectors. However, they had a common target of serving tourists, thus supporting each other.

Tuan said the country’s tourism sector had a lot of potential and opportunities for development. Last year, Viet Nam for the first time welcomed more than 10 million international tourist arrivals, representing a 26 per cent year-on-year rise. It also served 62 million local tourists, with a total revenue of VND400 trillion (US$17.5 billion) or 18.6 per cent higher than the previous year.

This year, the sector is expected to see over 13 million international tourist arrivals, increasing 30 per cent from last year, while serving 75 million local tourists to earn VND500 trillion ($22 billion).

“If the sector reaches the set targets, it could contribute one percentage point to the country’s GDP in 2017,” he said, adding that the sector had striven to digitalise its activities as smart tourism would be a requirement, a trend and a task to keep up with the current situation. — VNS