The number of foreign investors may decrease by 3.7-4.7 million, and the number of domestic travelers by 10.9-15.3 million.

The Vietnam National Administration of Tourism (VNAT), analyzing the average spending of travelers and the decrease in predicted number of travelers, has estimated that the loss the Vietnam’s tourism industry may incur could be up to $7.7 billion. 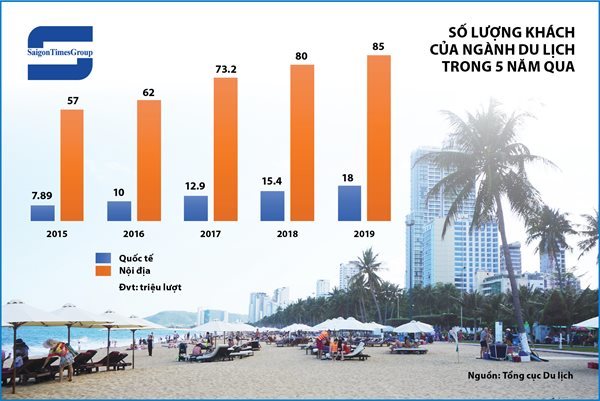 The number of travelers in the last five  years

The Chinese market, which provides 30 percent of total foreign travelers to Vietnam, is expected to see the sharpest decrease, by 90-100 percent. Vietnam may lose 1.7-1.9 million travelers from the market. The average spending of tourists is $1.021 per traveler, which means a loss of $1.8-2 billion.

Meanwhile, the number of travelers from other markets may decrease by 50-70 percent, or 2-2.8 million travelers. With the average spending level of $1.083, the loss would be $2.2-3 billion.

VNAT and travel firms are busy dealing with tour cancellations and money refunds, but it is time for them to prepare scenarios to recover the market when the epidemic ends.

If the epidemic ends in late March, tourism promotion campaigns need to start in April. If this scenario happens, the tourism sector can begin the annual domestic travel season which begins in late May, and begin organizing outbound tours.

In another scenario, foreign travelers may return to Vietnam in June. In order to regain growth in inbound market and serve the high season of receiving foreign travelers (from October 2020 to April 2021), the tourism sector needs to step up advertisement activities in from April to September 2020.

Some healthcare experts predict that the nCoV epidemic can end after the summer 2020 at the earliest.

In this case, tourism activities would resume only from Q4 2020. Travel firms will meet difficulties with their promotion programs in the domestic market because they don’t have much time. However, they will still have time to promote inbound tourism.

VNAT believes that it would be better to step up the exploitation of nearby fast-growing markets which can be connected with favorable air routes such as South Korea, Japan, Taiwan and ASEAN.

Vietnam will attach more importance to the North American markets, including the US and Canada, especially since US-Vietnam direct flights are expected to be provided in the near future.