The Central Highlands province of Dak Lak plans to increase the proportion of processed coffee such as instant coffee and powdered coffee from less than 10 per cent to 15 per cent in total coffee output by 2020 and up to 30 per cent by 2030. 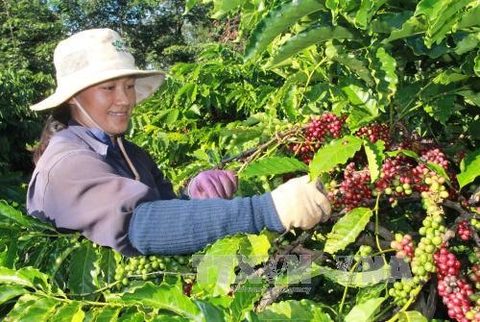 A farmer harvests coffee beans in the Central Highlands province of Dak Lak.

Pham Ngoc Nghi, chairman of the province’s People’s Committee, said the province’s policies were being adjusted to attract more domestic and foreign enterprises to invest in coffee processing.

He said that most locally based processing companies were private firms whose market access and product advertising capacity were modest.

Dak Lak, which has the largest coffee area and output in Viet Nam, has more than 200,000ha and an annual coffee bean output of 450,000 tonnes.

However, the province only has 145 coffee processing facilities with a total capacity of 32,100 tonnes, accounting for 5.55 per cent of the province’s total coffee bean output.

To achieve the targets, the province has created a more favourable investment environment for both domestic and foreign enterprises, particularly those specialising in roasting and grinding, to invest in processing factories.

The province has also helped coffee enterprises improve their corporate governance, promoted the use of advanced post-harvest and processing techniques and expanded market access for local companies.

Coffee farmers, producers and businesses are being encouraged to produce beans that can be certified by the coffee global certification programme (UTZ), the fair-trade labelling organisation (FLO), Rainforest Alliance (RFA) and 4C (Common Code for the Coffee Community).

The province, which has helped organisations, enterprises and co-operatives build brands, has offered assistance to companies to acquire rights to the geographical indication for processed coffee products.

It exported 4,520 tonnes of instant coffee worth nearly US$ 27 million, accounting for 7.5 per cent of the province’s coffee export revenue.

Viet Nam’s processed coffee exports are predicted to increase in the coming years due to more investment from domestic and foreign enterprises, according to experts.

Many coffee companies, including Trung Nguyen, Me Trang and Vinacafe, for instance, are expanding the scale of their production.

Under free trade agreements, exports of Viet Nam’s processed coffee are taxed at only 0-5 per cent compared to 15 -20 per cent in the past.

The country’s coffee industry is raising the value of coffee beans by speeding up the processing of powdered and instant coffee and other products.

Processed coffee products from Viet Nam are sold in many international markets.

The G7 instant coffee of Trung Nguyen, for example, has passed the requirements of Walmart Stores, Inc and is now sold at Walmart stores in many countries such as Chile, Brazil, Mexico and China.

Luong Van Tu, chairman of the Viet Nam Coffee and Cocoa Association, said China was one of the most important markets for Viet Nam’s processed coffee.