Y Nha, 37, is facing difficulties finding foods for his elephant which is working in the tourism services at Don Village Tourist Site in the Central Highlands province of Dak Lak. 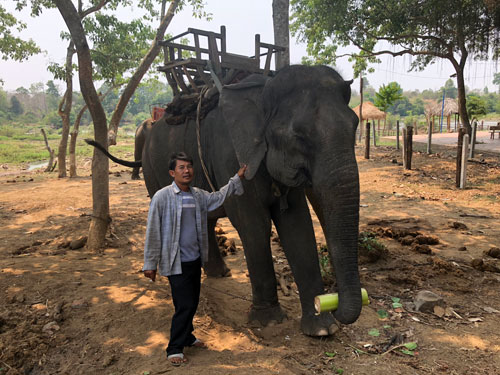 “Our Kham Mon can earn enough for his food during holiday seasons when he works hard transporting tourists,” Nha said. “But during the low season, it’s really hard for us to raise him.”

Kham Mon is one among 27 domestic elephants being raised in Don Village which used to be well-known for hunting and taming wild elephants. If owning an elephant meant a wealth for local people in the past, it is now a big challenge due to a lack of food.

“A mature elephant like Kham Mon need some 600 kilos of foods daily,” Nha said. “Most of the forested land in the area have been turned into coffee plantations so we usually have to spend about VND10 million (USD441) buying grass, banana trees and sugar canes to feed him. It’s a really big sum of money to us.”

According to Nha, all 27 elephants in Don Village are now participating in transporting tourists and they can only earn enough for their foods when there are many visitors using their ride service and they work hard. 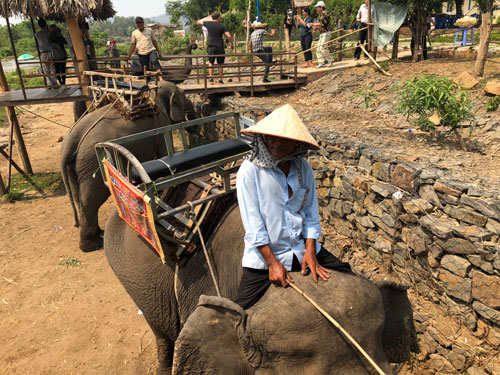 The man, however, reveals that most of the time he has to support Kham Mon. And although he is poor, he won’t leave the elephant.

“In our tradition, we all considered elephants our family members,” Nha said. “I treat Kham Mon, which means gold, like my son. I’m willing to go without foods a day to save for his food.”

The man stressed that the domestic elephants here will not be able to survive if being released into the wild.

“They will be attacked and killed by wild elephants,” he explained. “Some days ago, a group of wild elephants came to our area to find food and injured two domestic elephants. That’s why we have to buy food for our elephants but do not dare to let them graze in the forest.”

The number of domestic elephants in the Don Village has gradually decreased since 1981 when elephant hunting was banned. Nha said that it would be very difficult to increase the number from the 27 elephants now.

“We used to have baby elephants born here in the past but now it seems impossible,” Nha said, adding that the reason may be because female elephants having to work hard and lacking a favourable breeding environment.

“I fear that there will be no more elephant ride service in Don Village in some ten years, and our children will not have the chance to live with these good friends when the last 27 grow old and die,” Nha said.