Over 40 elephants in Dak Lak Province have been left exhausted after being forced to overwork through the lunar new year holiday period. 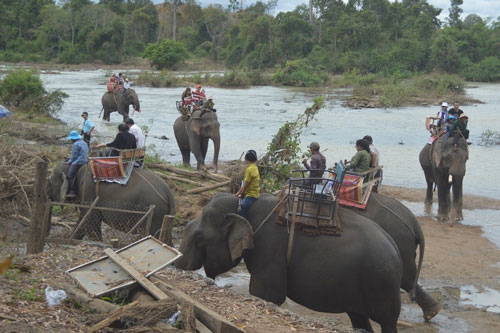 Le Thi Thanh Ha, director of Ban Don Eco-tourism Company, said it received 7,000 visitors this Tet and 70% of them wanted to ride elephants. Over 40 elephants were used at various well-known destinations in Dak Lak.

About 30,000 visitors arrived in Buon Don tourism site and most of them wanted to ride elephants. Dozens of people queued up in order to ride the elephants along the Serepok River. 15 elephants had to move around non-stop to meet demand. Several elephants were too tired and didn't want to go to the forest again, they were poked by the trainers. Each elephant carried three to four visitors as they walked slowly from exhaustion.

“When they are stubborn, I use this iron bar to poke  them. They immediately follow my order,” one trainer said.

Cao Thi Thai, a visitor from Dong Nai Province, was worried and gave away her ticket after seeing that her trainer was still a minor. She said the elephants might become violent after being forced to work non-stop for days.

Meanwhile, a Thai tourist said he was surprised because visitors at a tourist site near his home were only allowed to observe the elephants.

Recently, Vietnam Administration of Forestry held a conference about elephant management as the species is facing extinction in Vietnam. Many experts agreed that Vietnam should limit the use of elephants at tourist sites. Some countries have already banned riding elephants, instead, running tours to help visitors understand more about the elephants' life.

Huynh Trung Huan, Dak Lak Elephant Conservation Centre said before Tet, they had asked elephants owners to refrain from using elephants. They also called and warned the owners during Tet Holiday to no avail. The centre plans to visit each elephant owner and give the weak elephants medicines.

“We also hope visitors will be more aware of this issue and won't ride the elephants. Visitors can observe, feed and take pictures of the animals. Without being over exploited, the elephants will receive better treatment,” he said.