For a taste of central highlands history, tourists to Daklak Province should  visit the tomb of the king of elephant hunters in Buon Don Village.

There are 40 elephant hunters buried in the unique graveyard that has about 40 tombs. The hunters entombed there killed at least 25 to 30 elephants each. To be buried in the cemetery was a tribute to their huntsmanship. 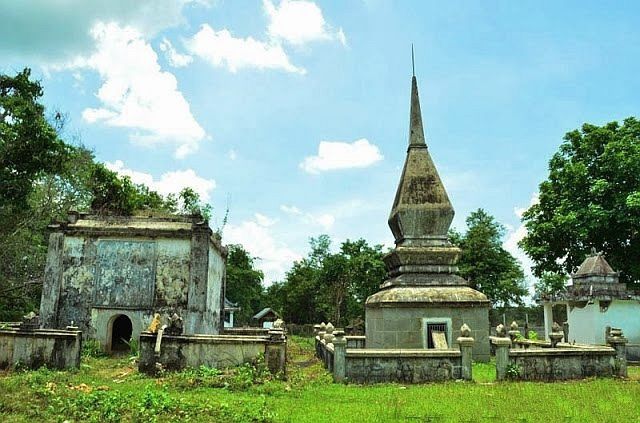 The oldest tomb belongs to N’Thu Knul, who was a powerful tribal chief born in 1828. He is worshipped as founder of the art of hunting elephants. He also tamed hundreds of the big animals and presented one of them to the royal family in Thailand earning him the title of King of Elephant Hunters (Khunjunob) from the Thai King. A year after his death, in 1939 at the age of 110, his nephew R’Leo Knul held a ceremony and built the tomb for him.

The tomb of R’Leo Knul lies next to his uncle’s tomb. Born in 1871, he succeeded Khunjunob as tribal chief, and developed the tradition of elephant hunting and taming in the Village. R’Leo Knul tamed a white elephant for the late emperor Bao Dai. R’Leo Knul died in 1941 at the age of 70.

The tombs are built in the M’Nong-Laos architectural style and are decorated with lotus flowers and two pairs of wooden peacock statues.

The tombs of women are decorated with fabric.

All tombs have a hole in the top. When they buried the dead, they placed the hunter’s mouth under the hole so they could feed him rice every day for three years. After three years, the villagers held a ceremony called le bo ma (grave-leaving ceremony), a traditional ceremony of the ethnic people in the highlands to say goodbye to the dead. It was usually organized in the spring and was considered a festive day. Villagers gathered at the cemetery grounds, and the family members brought offerings of food.  They sang songs, danced and enjoyed the food and drinks taken from the altar in the belief that the soul of the dead returned to join the feast. After the ceremony, relatives of the dead no longer took care of the grave.